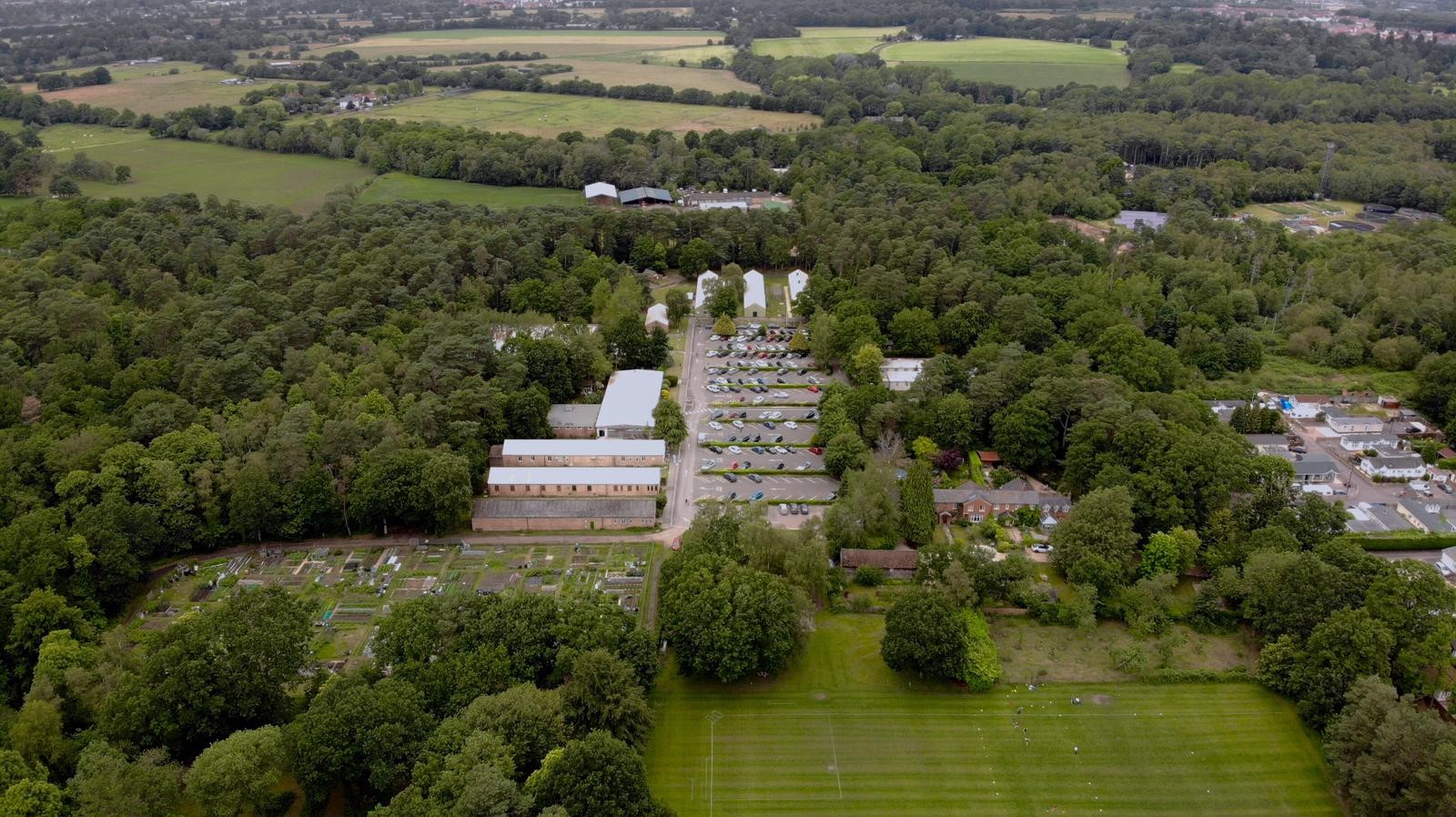 The Civil Parish of Wokingham Without came into existence in 1894 when it and its counterpart, Wokingham Within were created – one urban and one rural. The parish originally curved around Wokingham proper from north to south in a west facing crescent. The area to the north is called Ashridge (anciently called Hertoke). This is the region of Wokingham parish which was, until 1844, officially a detached part of Wiltshire. However, in more recent years, this area has been transferred to the parish of St Nicholas Hurst. The area to the south of Wokingham is modern Wokingham Without. It consists of the ecclesiastical parish of St. Sebastian’s, formed in 1871, divided into two sections. The largely rural north includes the hamlets of Heathlands (alias St Sebastians), Holme Green and Gardeners Green. The southern end of the parish is more urbanized, and includes Ravenswood (anciently called Bigshot) and what is really an extension of the Crowthorne urban area. Ludgrove School at Wixenford is actually just in Wokingham Without, rather than Wokingham. It was originally part of the ancient Parish of Wokingham and its parishioners are still entitled to avail themselves of grants made by the Wokingham United Charities. 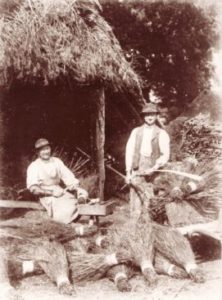 Wokingham town started as a very small village called Oakingham. When a number of people from Woking (Surrey) moved to the village the name was changed. The name Wokingham was taken from the Old Saxon farmer Wocca, with the new name meaning “Wocca’s Peoples Land”.

Much of the local history is reflected in the Parish’s insignia. The arrows are symbolic of St Sebastian’s martyrdom (He is commonly depicted in art and literature tied to a post and shot with arrows) the antlers of the Royal Forest and the oak tree of ‘Oakingham’. Lastly the brooms are a reminder of the colourful characters of the nineteenth century that resided in this area.

A dip into local history shows evidence of human settlement from pre-Roman times. Also marked on the Ordnance Survey map is ‘The Devil’s Highway’ which was a Roman road stretching from London to Silchester and on to Bath.

For a long time the local area formed part of The Royal Forest of Windsor with its great oak trees and was a hunting place for kings and highwaymen. A Royal Hunting Lodge was built at Easthampstead and used by Edward III and later kings. Claude Duval the notorious highwaymen robbed travellers as they travelled through the forest.

The Nine Mile Ride is probably the most well known of the rides, created throughout this area for Queen Anne (and later George III). In old age, she was unable to ride with the hunt, so liked to follow in her carriage instead.

In the early nineteenth century the population of the area around St Sebastian’s was between three and four hundred. Many of these people made their living by making besom type brooms and selling them at the markets of Guildford and Reading . These so called ‘broom dashers’ lived in makeshift settlements and were an unruly lot, which was not appreciated by other residents. Their unruliness may be linked to the existence of four public houses in the area.

Mayor Sawyer, a local resident tells us that ‘drunkenness was very general’. By 1901, the broom trade was in decline and of the public houses, only three remained, The Crooked Billet, The White Horse and ‘The Who’d ‘a’ tho’t it’. The latter was closed and demolished in 2003.

It is likely that St Sebastian’s Church was also built for the benefit of the broom dashers who were described as ‘practically heathen’. The Church built in 1864 is also worthy of note as its architect was William Butterfield who later built Keble College, Oxford. The adjoining school was built on land given by Miss Heelas, a member of a well known local family.

In 1911 the Bearwood Estate Auction was held. The estate had belonged to the Walter family who had founded ‘The Times’ in 1785. A third John Walter in 1911 needed capital to use in a Fleet Street newspaper war and decided to sell the estate. In addition, his son had died tragically at Bearwood and so Bearwood held unhappy memories. The auction catalogue of the sale contained details of rented properties in Wokingham Without. These rents ranged from a cottage at 1/6d per week to a more palatial ‘Brick and Tiled Residence’ let at £20 per annum. Much woodland and agricultural land was also sold at this time. 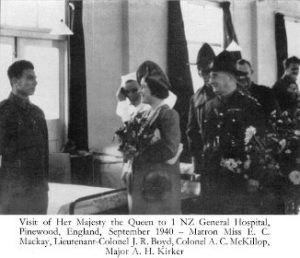 Heathlake, off Nine Mile Ride, is a Site of Special Scientific Interest as it has the only acid lake in Berkshire providing a naturally high pH which supports several rare plants, including the water-millfoil and the six stemmed water crowfoot. Heathlake was created by the Palmer family of Huntley (of biscuit fame!), probably to improve the view from their house as they lived across the road at Heathlands.

The Palmer family also built St Sebastian’s Memorial Hall as a memorial to the First World War for the estate workers and local people. William Howard Palmer (known as Howard Palmer) was a director of Huntley & Palmer Biscuit Factory in Reading, hence the ‘Howard Palmer’ room. His wife, Mrs Ada Palmer, started a branch of the Women’s Institute at St Sebastian’s Memorial Hall. The building was given to the Parish Council in 1950 to be looked after for the people of the parish.

Several large houses in the area, although now not occupied by families have left their mark on the parish. Not least of all is Ravenswood, This is now Ravenswood Village set in 120 acres it provides homes and education for those with learning disabilities. The country mansion Holme Grange built in 1883 by the architect Norman Shaw is now a preparatory school and a Grade II listed building.

Wokingham Without Parish Council Office is located on the Pinewood Leisure Centre site on land owned by the Borough Council. Originally this site was Pinewood Sanatorium opened in St Sebastian’s in 1901. Called the London Open Air Sanatorium it was designated for the use of the capital’s tuberculosis sufferers, the surrounding pine trees were thought to be conducive to recovery.

During World War II Pinewood was used as an American Airforce Hospital. In May 1940 No1 New Zealand General Hospital was mobilised for what was thought would be the Middle East, however it came to the Pinewood Sanatorium and remained until being shipped out to its original destination, in October 1940. During this time they were visited by King George and later by Queen Elizabeth (the Queen Mother).

In the 1960’s the Sanatorium was also used as a film location and two episodes of the New Avengers were filmed there. The police also used the site for fire arms training.

In the 1970’s Wokingham Council granted the lease of the Pinewood Site to Wokingham Without Parish Council. Local Parish Councillor and resident Mr ‘Dickie’ Dove headed a committee and worked tirelessly in transforming the site. With his volunteers, borrowed equipment, minimal funds and a lot of determination all site services were reinstalled and the site cleared to create Pinewood Centre.

The Centre has been developed over 30 years by Wokingham Without Parish Council and is now home to a wide range of sport and leisure organisations, many of which are listed in this guide. In addition, the site contains a large miniature railway track, allotments, outside playing pitches and extensive areas of woodland.

The Borough Council is committed to providing assistance to the Parish Council to consolidate and improve the facilities. The enthusiasm and good management of the site by the Parish Council has enabled a wide range of interest groups to flourish and grow.Last Updated on 15th February 2021